Elected for the first time as a Councilor in 2006 and reconfirmed without interruption up until the latest elections in 2019, he was also member of the Finance Commission (2011) and of the “Commission on the Phenomenon of Organized Crime Infiltration,” where he acted as President from 2016 to 2018. He was also member of the Parliamentary Assembly of the Mediterranean. He was Captain Regent (Head of State) during the semester from April 1 to October 1, 2008. The process for San Marino’s participation in the Expo began back in 2018 by issuing on December 11, 2018 Legislative Decree no. 156, “Guidelines regarding the structure and Organization/Management of the Commissariat General of the Government for participation in the World Expo 2020 in Dubai.”

The San Marino Commissariat General for the World Expo 2020 Dubai was established by law, on August 8, 2018 no. 104, with headquarters at the Agency for Economic Development, with the goal of organizing and managing the Republic of San Marino’s participation at Expo 2020 Dubai. It is in charge of managing in San Marino and abroad all the initiatives related to the nation’s participation as well as all the initiatives, events, and forums of an economic, scientific, cultural, and artistic nature so as to achieve set goals.

The law also calls for special budgeted funding to guarantee San Marino’s participation with its own Expo Pavilion.

With resolution no. 10, January 10, 2020, the government established the Operative Office of the Commissariat General based in Palazzo del Turismo, at the headquarters of the Secretary of State for Tourism and Expo.

Operative office of the Commissariat General for Expo 2020 Dubai

Commissioner General for the San Marino Government at Expo 2020 Dubai

He has been a San Marino delegate to BIE since 2004 and, in the role of expert, he was appointed twice by the BIE Secretary General as a member of international missions on half of BIE to assess candidates wishing to host the Expo in Astana (Kazakhstan) in 2013 and in Ekaterinburg (Russian Federation) in 2018.

In 2002, following a public competition, he began his diplomatic career for San Marino at the Ministry of Foreign Affairs and covered many roles including: Embassy Secretary for OSCE (2002–2007), San Marino representative at the Executive Council for UNWTO (2005–2009), representative at ETC (2006–2016), and non-resident Ambassador to Brazil (2005–2009).

He represents San Marino as Focal Point at UNWTO (United Nations World Tourism Organization) and is the representative on the Governing Board for EPA regarding Cultural Itineraries for the European Council. He is currently Ambassador (non-resident) for San Marino to Portugal (since 1998) and to the United Arab Emirates (since 2018). 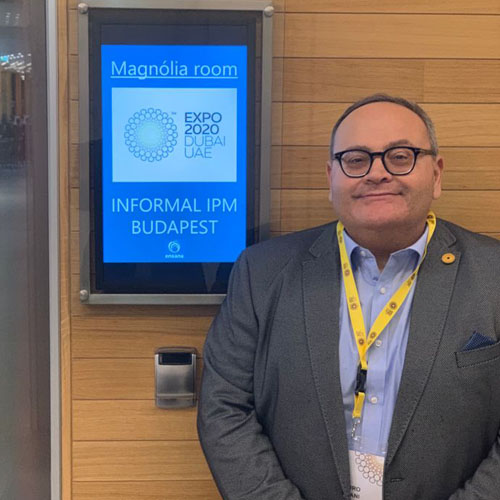 Francini Filippo, appointed Commissioner General of the Government of the Republic of San Marino at Expo 2020 Dubai on 4 November 2021, was born on 20 December 1967 in San Marino where he resides.

His training and professional path includes a degree in Economics and Commerce specializing in finance, achieved in 1992 at the University of Bologna, as well as numerous training courses, including the Advanced Training Course in internationalization processes of businesses at the University of the Republic of San Marino, and has decades of experience in the banking and financial sector gained both in private banks and at the Central Bank of the Republic of San Marino.

He also held the position of Administrative Director of the Institute for Social Security, the most important public body in the Republic of San Marino.

She has been Head of Public Relations and Sales for the Expo 2020 Dubai Commissariat since August 31, 2020. After winning the competition, she was appointed by the State Congress at the August 10, 2020 session.

Previously she was Project Manager and Sales Manager for the San Marino Pavilion at Expo 2015 Milan.

She is also an accountant and auditor, collaborating with important international consultancy studios and with the highest economic institutions and category associations in the Republic of San Marino.

Since 2004 she has taught Business Administration at the high school in San Marino and has also covered the role of Activity Coordinator for the “Consorzio Terra di San Marino,” whose goal is to safeguard the integrity, quality, and authenticity of food-farming productions in the Republic of San Marino.

She is also a member of the technical committee for the International Relations Research Center (CRRI) at the University of San Marino and of the Administration Committee for FONDISS (complementary social security/social welfare fund). 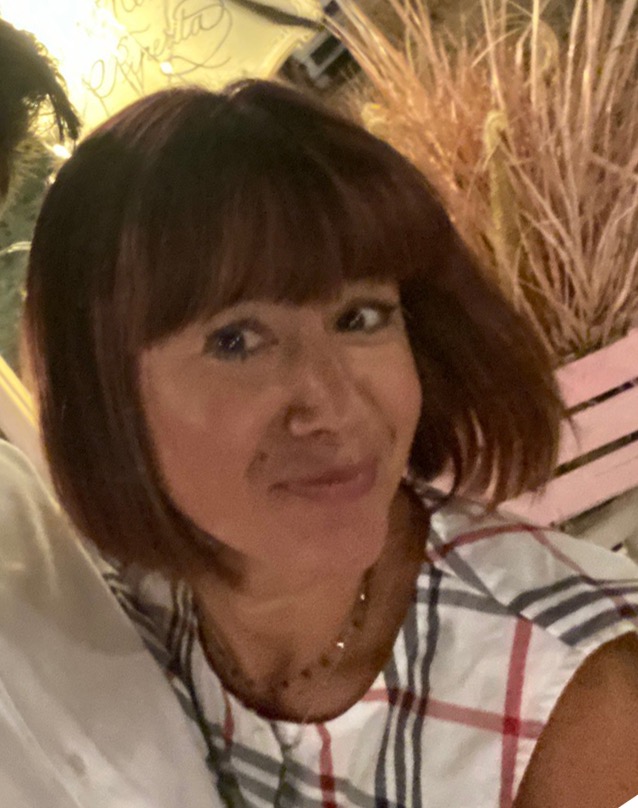 Elena Minutillo has been the specialized professional at the Secretariat for the Commissariat General since September 15, 2020. Upon winning the competition for this role, she was officially appointed by the State Congress at the August 10, 2020 session.

She earned a degree in Tourism Studies at the School of Business and Economics from the University of Bologna and also holds a degree in accounting.

For the previous Expo 2010 in Shanghai she was a Specialized Technical Professional in English for the Commissariat General.

In the past she has also worked at the Autonomous State Office for Stamps and Coins as a public relations officer. During the XXIII legislature she was part of the Ministry for Tourism staff.

Recently, she worked for the Tourism Office as part of the administration. She was relocated to the Commissariat General for Expo Dubai 2020 on September 15, 2020. 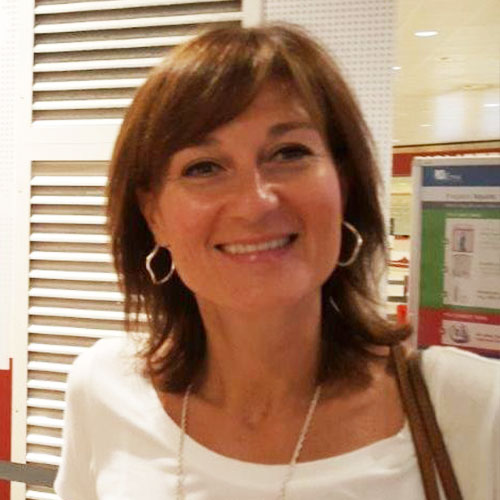 Born in San Marino on April 23, 1975, he has always lived in Borgo Maggiore. Zani, who is married and has a daughter, graduated in accounting in 1994. From 1994 to 2008 he worked in the private sector in an administrative role. Since 2008 he has been an employee at the Agency for Development – Chamber of Commerce S.p.A., where over the years he has held commercial, administrative, and marketing positions. Since 2007 he has also been Secretary General for the Federazione Sammarinese Motociclistica. 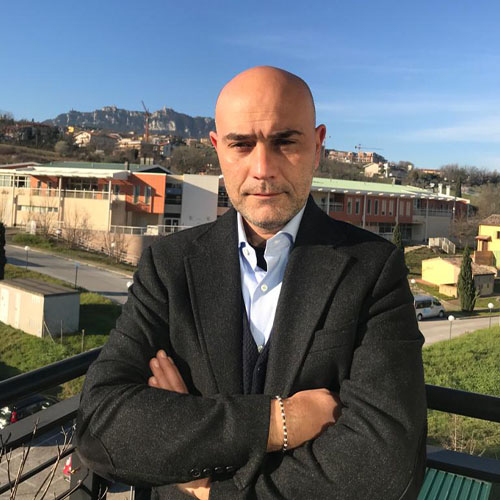 The Agency for Economic Development – Chamber of Commerce S.p.A.  was established with Delegate Decree, April 12, 2018 no. 38, and was subsequently reformed with Legislative Decree, February 3, 2020, no. 20

The Agency for Economic Development is the tool for state policies regarding the promotion and internationalization of the Republic of San Marino. Its goal is to attract investments directly from abroad and to accompany businesses in their initial dealings with San Marino as well as to provide services regarding internationalization and economic analysis to support companies.

The Expo 2020 Dubai Decree, 73/2020, establishes that the Commissioner General, in his activity organizing, coordinating, and providing for all aspects in San Marino’s participation in Expo 2020 with its own Expo Pavilion, may use any human, technical, and administrative resources from the Agency.

The Agency, therefore, is responsible for authorizing all expenses on the part of the Commissariat General as well as annual and pluriannual balance sheets and managing income derived from sponsors or sales. All collaboration and supply contracts for goods/services for the Pavilion are proposed by the Commissariat and are then authorized and stipulated by the Agency.

On November 9, 2020 a non-binding agreement was signed between the Commissariat and the Agency to define the technical and operational modalities concerning this collaboration.

The Agency created its own Expo division that is directed by Massimo Zani who is also the Secretary General for the Expo Commissariat, provided for by the above-mentioned Decree73/2020. 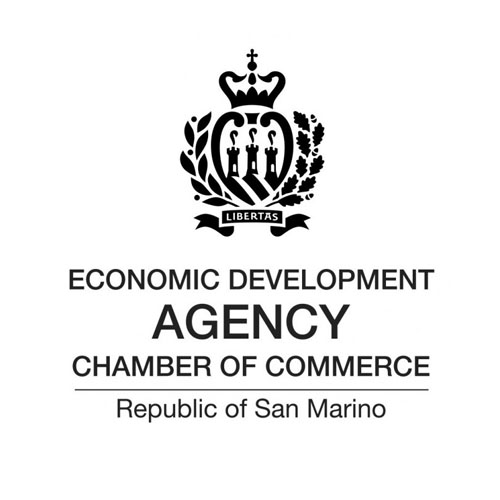