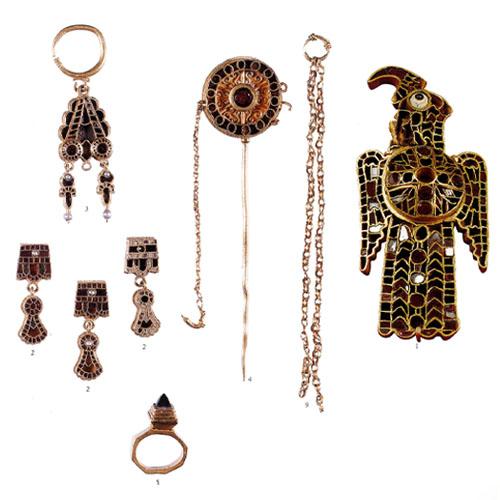 GulfNews.com, the largest English-language press service in the Middle East with a monthly coverage of over 5 million readers, has mentioned San Marino Pavilion in the top 7 of the Expo Pavilions worth visiting for the historical relevance of the exhibits showcased at Dubai Universal Exhibition 2020.

It is a reproduction of the “Tesoro di Domagnano”, a set of jewels found by chance in 1893 during agricultural works in the San Marino locality of Domagnano. The treasure was probably owned by a high-ranking Ostrogothic noblewoman, linked to the court of the Gothic king Theodoric - 493-526 with capital in Ravenna, about 70 kilometers from the place of discovery - and it is composed of 22 elements divided into two series: ornamental objects and accessories.

The original pieces, in almost pure gold, are scattered in 5 different museums around the world. The most important, the “Fibula of Domagnano”, an eagle-shaped jewelry masterpiece and a unique piece of craftsmanship, is exhibited at the Louvre Abu Dhabi.

The San Marino Pavilion, for the first major Universal Exposition in the United Arab Emirates, will present to the public the faithful reproduction of the entire Treasure realized by the Bolognese goldsmith Marco Casagrande, currently exhibited at the State Museum of the Republic of San Marino, in the Territory Archeology section.

The experimental reproduction of the Treasury project was promoted in the years 2004-2006, on the initiative of Rotary Club of San Marino and Cassa di Risparmio Republic of San Marino Foundation - S.U.M.S. and donated to the State Museum.

"Being mentioned by the main UAE newspaper among the seven pavilions to visit at Expo Dubai 2020 is surprising news," said the Commissioner General for Expo Mauro Maiani. "We are the third smallest Republic in the world and seeing San Marino in the top 7 is a source of great pride and happiness".

Among the other Pavilions mentioned by Gulf News we find the hieroglyphs of the Egypt Pavilion, Michelangelo's David of the Italy Pavilion, the Encyclopedia of Diderot & d'Alembert of the French Pavilion and above all the golden ring of the UAE Pavilion dating back to the iron age excavated by Saruq Al Hadid in Dubai which was the inspiration for the current official logo of Expo 2020.