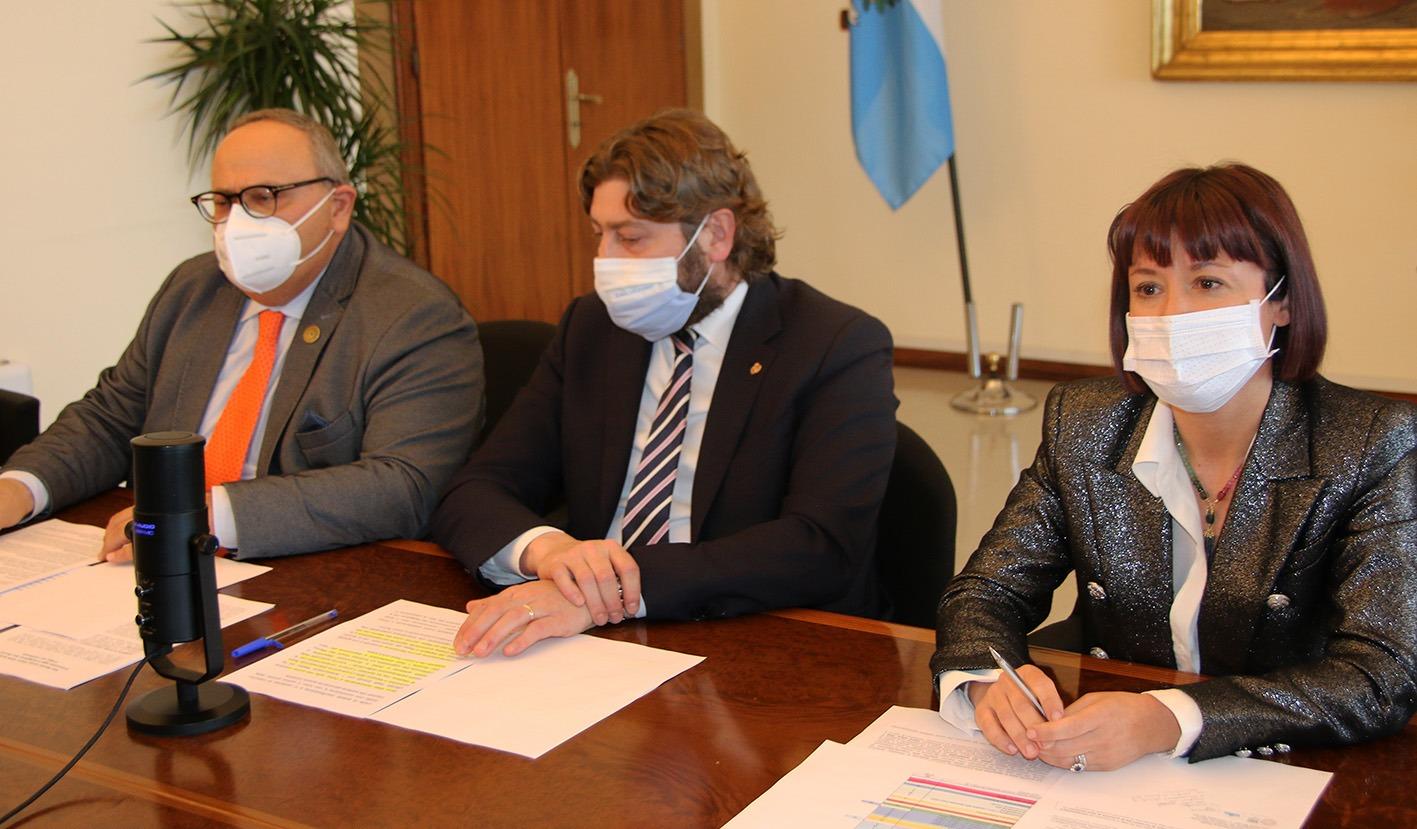 San Marino’s journey towards Expo 2020 Dubai continues apace, and today saw the unveiling at a press conference of the San Marino Pavilion, the exhibition theme, the logo and the development of the visitor experience. There are now only five months to go until the opening of the Expo, scheduled for October 1, 2021. This year’s Expo – the first not to be staged during the summer months – will be held for the first time in the Middle East.

As the Secretary of State for the Expo, Federico Pedini Amati, stated in his remarks at the opening of the press conference to present both the San Marino Pavilion and San Marino’s appearance at the event: “This is an unmissable opportunity for our country, which will be contributing to the Dubai Expo along with another 190 nations, showcasing San Marino to the world by focusing on our history and our national economic system, with a view to bolstering the drive towards internationalization on the part of our businesses and attracting investment and new tourists from new markets with which San Marino has not thus far engaged directly. This participation is becoming more tangible with every passing month and is geared towards grasping the opportunity to promote San Marino’s economy in the Gulf area, which is an economically attractive hotspot for international investors and global business. The Expo will provide a unique opportunity to demonstrate the investment opportunities, advantages and potential offered by San Marino.” Secretary Pedini referred to the recent meeting in Dubai with the Minister for International Cooperation, Her Excellency Reem Al Hashimy, and announced the upcoming participation of the San Marino Tourism Board at the ATM Expo in Dubai, which is the most important such event for the Arab market.

Providing more detail on San Marino’s appearance at the Expo, the Commissioner-General of San Marino, Mauro Maiani, charted the main stages in the run-up to the event – a journey that began back in 2013. He then illustrated the work done by the Commissariat-General and its three-strong team, and the partnership with the Agency for Economic Development, which in accordance with the decree collaborates with the Commissariat, the management of administrative matters, logistics and human resources all falling under its remit.

He then cited the planned first shipment of materials to Dubai in a 40-foot container, set to depart at the end of May with all of the equipment required for the fitting out of the pavilion and some of the craft items and merchandising to be put on sale within the pavilion.

The process of selecting staff for the pavilion is currently ongoing and will be completed by the end of May. The deadline for the volunteer program is May 7.

The San Marino Pavilion has an exhibition area of around 240m2 on the ground floor, with around 100 m2 available on the first floor, which also plays host to the offices and a meeting room. The Commissioner is also orchestrating a VIP Lounge to welcome guests, sponsors and institutional and commercial delegations, in addition to members of the press.

The roots of the pavilion lie in the initial concept design created by the students at the University of San Marino, which was then taken forward by the Expo and subsequently developed by architect Francesco Ammirati, a partner of the project team led by AC&D Solutions, which is handling the marketing aspects of the pavilion.

The pavilion will feature four distinct areas or rooms:

In the first (entrance) room, concerned with San Marino’s history, a specially designed display case will include an archaeological reproduction of the Domagnano Treasure, which is currently on display in the State Museum.

The central room, highlighting tourism in San Marino, will play host to the second item – a typical San Marino crossbow, displayed in partnership with the Federation of San Marino Crossbowmen, symbolizing the defense and freedom of the republic.

The third room focuses on the national economic system, concentrating on some of the main strengths of San Marino’s economy. The center will feature an interactive multimedia table with eight tablets, two of which are suitable for use by those with disabilities. The idea of the interactive table has been developed by the organizer but was already envisaged in the concept design put together by the Creative Youth Program.

The fourth room showcases the commercial opportunities offered by San Marino, featuring a 50 m2 store space. Arianna Serra, Head of External Relations and Sales, states that a full 22 companies declared themselves interested in having their products selected for sale in the pavilion, launched in October 2020 and covering a range of different categories: crafts; agri-food and typical products; stamp collecting and numismatics; jewels and jewelry; beauty and wellness; publishing; and merchandising of various kinds. At present, the total number of individual items that will be brought to the Expo – following a long, complex procedure of acceptance and validation carried out by the organizer in the UAE – amounts to more than 250, and by the end of May the first of three planned containers, full of goods and furnishings, will leave for Dubai.

In the exit area, the nine flags with the coats-of-arms of San Marino’s nine municipalities will mark the end of the visitor route. 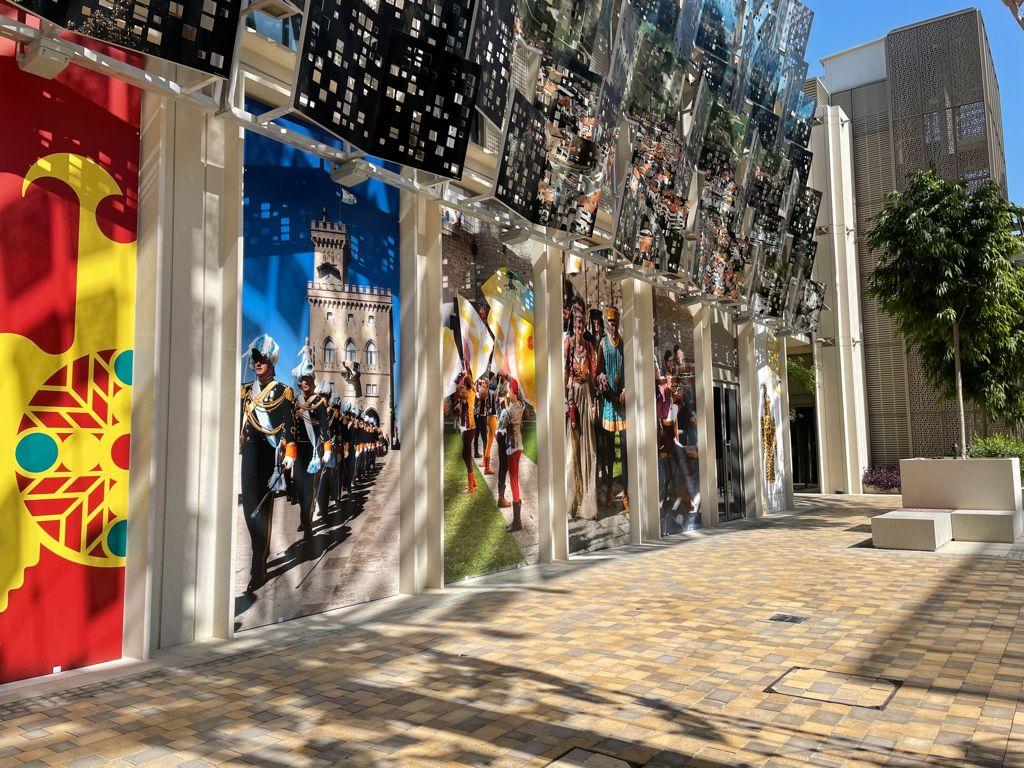